Notice - The latest information on how UC Berkeley is responding to coronavirus.

Administrative officials must report to the LDO any known or suspected improper governmental activity – whether reported as a protected disclosure by their subordinates or discovered in the course of performing their duties – when any of the following conditions are met:

Administrative officials may not directly or indirectly use or attempt to use the official authority or influence of his or her position or office for the purpose of interfering with the right of a person to make a protected disclosure. See the Whistleblower Poster.

University resources include, but are not limited to, cash, property, name and trademarks, patents, personnel, time due to UC Berkeley by employees, equipment, electronic information resources, and other items of value owned by or entrusted to the University. Resources which should have rightfully become assets of UC Berkeley but did not are also included.

Misuse of University resources occurs when there is:

Examples of misuse are embezzlement, performing or directing University personnel to perform non-University work on University time, using University facilities or property for non-University business, conflict of interest situations which benefit an employee, person or entity affiliated with the employee, illegal acts, and inappropriate financial transactions or web-based activities.

Incidental personal use of electronic communications services (such as telephones, internet, and e-mail) is permitted, provided that the use does not interfere with others' use of those services, interfere with the work of University employees (including the person using the service), and incur noticeable, incremental costs to the University. More information can be found on the 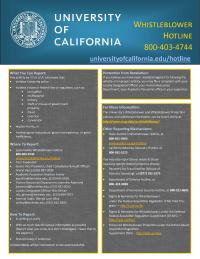