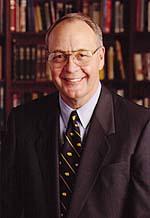 Robert M. Berdahl took office in July of 1997 as UC Berkeley's eighth Chancellor with a promise to renew the University's foundations of excellence. He has established a comprehensive master-plan that is guiding work on major seismic and infrastructure upgrades to campus buildings, and is addressing the need for space suitable for modern research and teaching. He has worked to successfully rebuild the library collection and has also been active in supporting two new collaborations. The new Health Sciences Initiative will conduct interdisciplinary research on our most serious health problems, and the Center for Information Technology Research in the Interest of Society, will address ways that smart and cost efficient technology can improve many aspects of our daily lives -- for example, transportation, emergency services and telecommunications.

To provide more support to faculty, the Chancellor has recently reorganized the University's administration, and has initiated a series of reforms that will address a wide range of issues -- from increasing the numbers of women and minority faculty members on campus, to strengthening the undergraduate classroom's use of technology, to improving the work climate.

A career-long advocate of enhancing and humanizing undergraduate learning, Berdahl has expanded the highly popular Freshman Seminars in which senior faculty teach small classes. A historian himself, he has taught a Freshman Seminar on the history of UC Berkeley. Joining the campus at the initial implementation of voter-mandated admissions changes, Berdahl continues to champion the educational and societal benefits of a widely diverse student body. He has strengthened campus outreach efforts by forming the Chancellor's Administrative Policy Committee on Outreach and has brought together the over 100 outreach programs on campus under the coordination of the Vice Chancellor for Undergraduate Affairs.

Berdahl came to UC Berkeley from the University of Texas at Austin where he had served as President since January 1993.

As President of UT, Berdahl stressed undergraduate education, focusing on quality education and on university outreach to the communities, especially K-12 education in the cities. A stronger sense of community amidst diversity on the campus was a central goal of his administration. He stressed quality teaching and devised a series of small, community-oriented programs to unite disparate elements on the campus.

Before assuming his post at UT, Berdahl served as Vice Chancellor for Academic Affairs at the University of Illinois at Urbana-Champaign from 1986 to 1993. He was involved in efforts to revise undergraduate degree requirements, restructure freshman orientation and expand academic support programs. He helped enhance the role of teaching in the tenure/promotion review process, improved opportunities for minority recruitment, introduced a strategic planning process, and helped improve the University's technological capacity.

From 1967 until 1986, Berdahl served as a member of the history faculty at the University of Oregon. From 1981 to 1986, he was Dean of the College of Arts and Sciences at Oregon.

Berdahl received his B.A. degree from Augustana College, Sioux Falls, South Dakota and his M.A. degree from the University of Illinois. He received his Ph.D. from the University of Minnesota in 1965 and an honorary Doctorate of Science in 1997. He is the recipient of numerous honors and awards including the 1993 Distinguished Alumnus Award from Augustana College, a Fulbright Research Fellowship, and a National Endowment for the Humanities Independent Study and Research Fellowship. He has also served as a Research Associate at the Institute of Advanced Study in Princeton and at the Max-Planck Institute for History in Göttingen, Germany. Chancellor Berdahl is currently the Chair of the Association of American Universities, a member of the American Academy of Arts and Sciences. He is the author of one book and the co-editor of another, and has written numerous articles dealing with German history.

Berdahl was born in 1937 in Sioux Falls, South Dakota. He is married to Margaret "Peg" Berdahl. They have three married daughters, Daphne, Jennifer and Barbara, and five grandchildren.